Simple-to-use DNA testing kits, such as 23andMe and AncestryDNA, have been providing millions of families with eye-opening snapshots of where their ancestors came from. Now, the Swiss Gemmological Institute (SSEF) is employing similar DNA fingerprinting technology to determine the origin of natural and cultured pearls. 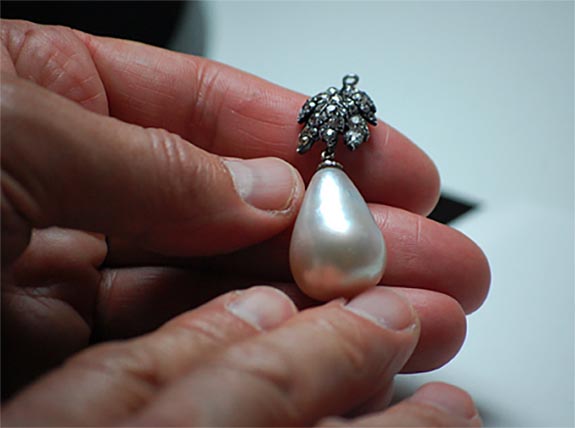 By combining DNA fingerprinting with age-dating technology already provided by SSEF, it is now possible to gain previously inaccessible scientific insights into a pearl’s unique origin and provenance. In the future, a natural pearl, such as “La Peregrina” (seen here), could be tested to determine exactly where and when it was harvested.

The new fingerprinting capabilities were developed by SSEF in partnership with the Institute of Forensic Medicine at the University of Zurich. The organizations have substantially expanded their DNA fingerprinting reference database and capabilities, which now include eight oyster species that produce the vast majority of pearls found in the natural and cultured pearl trade.

They included the following:

SSEF has refined its testing method so the subject pearl will not be harmed. The amount of material required for testing has been considerably reduced to an infinitesimal amount.

“We are happy to build on decades of pearl research at SSEF to launch this new service for the pearl trade,” said Dr. Michael S. Krzemnicki, director of SSEF. “DNA fingerprinting will contribute to further documenting the origin and geographic provenance of historic natural pearls and traceability efforts in the cultured pearl trade.”

“In addition to our collaboration on DNA testing of precious corals and ivory,” said Dr. Adelgunde Kratzer of the Institute of Forensic Medicine at the University of Zurich, “we are pleased to be able to contribute our lab expertise to documenting pearls, which are one of the oldest and most iconic gems known to humankind.”

Unlike many other natural and cultured pearls, the provenance of La Peregrina is well documented. After its discovery in the Gulf of Panama in the 16th century, King Phillip II of Spain gave the teardrop-shaped, 55.95-carat La Peregrina to Queen Mary I (Mary Tudor). The natural pearl also has been owned by Spanish royalty, the Bonapartes of France and the British Marquis of Abercorn. In 1969, Richard Burton spent $37,000 (outbidding a prince at Sotheby’s) to buy La Peregrina for Elizabeth Taylor as a gift for Valentine’s Day.